Since some of you only come here for pictures of The Beautiful Wendy (and who can blame you?) let's start off with that. Just ignore that guy next to her. 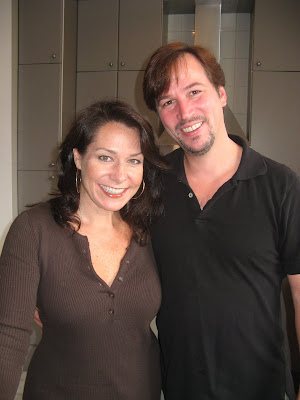 Having just finished “Heckuva Job Bushie!” by G.B. Trudeau I finally hauled my ass out of bed this morning. “That was great” I told The Beautiful Wendy who was still reading next to me. “The parts about B.D. coming back from Iraq and dealing with PTSD were so touching I actually teared up a couple times. I’m going downstairs to read the interwebs, you want anything?”

“It’s just a big series of tubes” she tells me. We’re very clever.

It’s been very busy here. We extended our stay for a variety of very important reasons, one of them being a wedding this August. In the three additional weeks we have been home we have put a new bed together, had dinner and a movie with my folks, Dinner with Wendy’s dad and girlfriend, met with our contractor about replacing part of our floor, had the entire downstairs painted, found a DJ we like for the wedding, visited venues to consider where we were going to have the wedding, looked over 23 videographers websites and narrowed it down to one who is actually free that weekend, shoveled the driveway twice, got a request from two more agents for partials, one of them which needed a chapter summary and needed it sent via mail not email, got our hairs cut, set up an “our wedding” website (to be revealed soon), wrote what I think is a hilarious “How we met” intro, stayed overnight at our favorite venue and decided it was the place and booked it, went on an exhaustive search for a photographer and finally found one we liked who was free that weekend, set up a cake and menu tasting (in two different places) went up and saw Avatar again (better the second time, my favorite film of all time I believe) proofed a copy of my book “I’m not an Alcoholic, I’m just European” and rejected it, re-edited parts of it and resubmitted it, had it rejected by the company for improper formatting, formatted it, resubmitted it, they rejected it again because I mentioned “Amazon.com” and now have to submit it again with the offending word removed, had game day with Kim, Terri, Hilary, Michele, Brian, Wendy, Me, Dan and Doug and that turned into game day and then another game day because we stayed overnight and played games again until five before finally heading homeward. Game day for us is different than for most people. We played “Game of Thrones”, “San Juan” “Carcasonne” and other board games. Honestly, I’m sure I’m missing about five other things we did that had to be taken care of, like, moving three truckloads of furniture, I forgot about that until just now and I’m sure there’s more. (I just realized, we did all of this in twelve days since we're still here until Friday.)

I gave Wendy “Carcasonne” for Christmas and we can’t get enough of it. We played two games last night, five games the day before and then it devolved into a dance party. And by dance party I mean Wendy and I dancing in our living room for three hours to blaring music ranging from “Glee” to “Golddigger.” We really are a good match.

Yesterday was actually relaxing. We went to see Avatar, bought some thirty lb dumbbells, went to dinner at our current favorite Middlebury restaurant, came home and played Carcasonne and then watched a new “Bones” that was so stupid we turned it off fifteen minutes before the end. And then sleep, blissful sleep.

If you haven’t seen Avatar yet, you are on crack. I'm pointing at you mom and dad. Yes, there are some giant sized plot holes in it but if you ignore them (like I did the second time) then it is just a beautiful movie with fantastic effects and a great story. I’m sorry, I loved it. The second time watching it was nice because I wasn’t analyzing anything. I just focused on the 3-D, the action and the story instead of, well critically examining it. If I was on Oprah right now I’d be jumping on my chair saying “I loved it!” and making a fool out of myself. (Hint: that’s a Tom Cruise reference.)

We are finally slowing down a tiny bit and are able to relax with only a few more appointments and packing left to take care of in our last five days here.

In other news, I’m tired of waiting for agents and living off my savings. 2010 will see the self-published release of “I’m not an Alcoholic, I’m just European”, “Night Mare”, “Quest for the Pro Tour II: The Secret Force of the Brothers Very Grimm” and who knows what else. All will be available from this website and Amazon.com. If they don’t bring me an income I’ll have to find something else to do, like under the table computer repairs for ex-pats or some internet job I can do from the apartment. Surprisingly, “Quest for the Pro Tour I” still sells a couple copies a week so I have hope that new material might actually provide me with some income, self published or not.

Hey, some people actually make it just through self publishing and advertising themselves so that’s my next route.

Wish me luck and happy 2010 everyone.
Let's close with a picture of my dinner on New Years Eve. The largest Lobster I have ever consumed coming in at a staggering 4.5 lbs, and yes, I did eat the whole thing in one day. 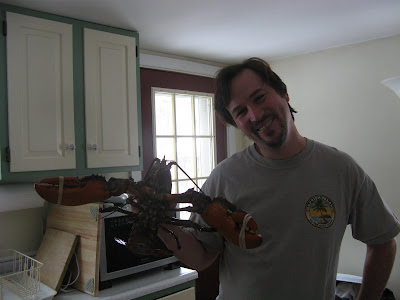 Wendy and I have had to revise our plans to return to Madrid and will be in Vermont until the 28th. More updates coming soon!
Posted by Jamie Wakefield at 7:35 PM No comments:

At lunch with Ben and Strother –

Waitress – Hi I’m Tasha, would you like something to drink first?

Ben: What do you have on tap?

We make our orders and Ben and I start to chuckle.

Ben: Ridgeback? Razorback? How about Brokeback?

Wendy and Strother roll their eyes as Ben and I erupt in a fit of giggles at our own imagined cleverness.
Posted by Jamie Wakefield at 6:07 PM 5 comments: