I’m going to have to learn how to be more snarky, condescending and just plain mean. I just have too many friends!

I do my best to keep up with emails, especially important ones that need a response right away, but every now and then I let things slide. I had a couple I needed to answer this morning and decided I would catch up on a bunch from the past I should have answered. It’s ninety minutes later and I have just hit “select all” then “delete.”

I just can’t do it! I have too many friends and Facebook has made it even worse.

Which is why Twitter continues to baffle me - who has the time? I don’t have the ability to keep up with meaningful emails much less type or read a random thought every twenty minutes. With an internet connection there are already constant distractions or websites I meant to check on in the middle of writing - like right now, I just remembered I wanted to look up where the phrase “hell bent for leather” came from. There was a guy yesterday who went flying by me on a bike, down the hill, steps and all and I thought “he is hell bent for leather.” How do you translate that into Spanish and where did that saying originate? You can find that answer and many more at the link below -

To bolster my point, I could sign up to Ashton Kutcher’s Twitter feed and read how he’s having a latte somewhere, or I could read the article Wendy just linked me to that actually educated me and bolstered something I already believe.

(And just so you know, I’ve never done anything harder than marijuana and that was some time ago.)

The point is, as I’m writing I already have enough distractions and if they come through my computer I want them to be worth it.

Sorry for the lack of updates recently. I have been focusing a majority of my time on playing and writing about Magic as well as editing “Secret Force: Quest for the Pro Tour II.” I am finally done with the editing and have started uploading files and cover art and descriptions to CreateSpace, will soon order a proof to look over and hopefully the book will be available in early November.

And since Doug S. continues to hound me for pictures of the dog (sorry for the bad pun) here’s a picture of the world’s largest dachshund with Wendy and I. The wine was the result of a scavenger hunt at Don and Bobbie Balou’s and it was our wedding gift. 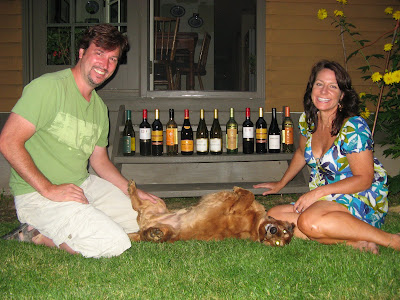 Posted by Jamie Wakefield at 11:49 AM 5 comments: Links to this post

I will be playing Secret Force this Saturday in Madrid.

I am very excited.
Posted by Jamie Wakefield at 6:43 PM 18 comments: Links to this post

How to Train Your Model

We watched “How to Train Your Dragon” last night. It has a rating of 98% on Rotten Tomatoes, one of the highest I have ever seen. The animation is spectacular, the storyline interesting and as the end approaches you have that feeling of “What the hell are they going to do now?” This is a good thing.

The last fifteen minutes of the movie needs work. The “What the hell they did do now” didn’t make sense on any number of levels. I won’t spoil the movie for you since it just came out on video but I give it a 7.5 out of 10. It’s very kid friendly; it’s worth the rental, but certainly not worth 98% on RT.

America’s Next Top Model (ANTM) has become a show we enjoy almost as much as Top Chef. Like any good competition reality show, the main cast is excellent; the host is stunning, funny, kind and wise. You grow to love and hate certain competitors as the weeks progress.

1. The girl with the best body is voted off first. (Fake breasts are bad. Actually, even real breasts seem to be bad.)

2. The geeky girl with the big glasses, who doesn’t know how to apply make-up, inevitably takes the best pictures and walks the worst.

3. There’s always a black bitch, sometimes two, that everyone in the house hates. (Those aren’t my words, those are Tyra Banks while interviewing a contestant.) “I cast a girl who became the black bitch of the house in season one and another one did the same thing to me in season two. Some of the girls who I’ve been interviewing don’t speak too kindly of you. I don’t want any black bitches this season, you understand?”

4. High fashion apparently means you look like a broken doll on heroin.

5. Posing to look sexy is actually bad. Hunching your shoulders forward is good. Looking like someone has taken a tire iron to your legs before the shoot is the best pose.

6. Looking like a coat hanger with legs is the best possible body. But keep it healthy!

7. Show up to the elimination panel looking like a model. This usually means jeans and a tank top. No, I’m not kidding. Apparently that’s what models wear.

8. Not too little make-up, not too much.

Sadly, I have to wrap this up. I can’t make the rest of it work. Wendy and I had a whole dialogue about what challenges and judges’ panel would be like for France’s Next Top Model, Saudi Arabia’s Next Top Model, Canada’s Next Top Model and what the judges would say, but I’m afraid I would offend too many people. I need all the fans I can get so I’ll have to leave that discussion to your imagination and for you to fill in, in the comments section.

Just, think along the lines of what type of body they might be looking for in, say, Amsterdam, or what the challenges would be in France, or how would you dress for panel to look like a model in Saudi Arabia? I think you get the idea.
Posted by Jamie Wakefield at 1:56 PM No comments: Links to this post

The Dog of Thunder continues to act like he’s lived here all his life. Our apartment is now covered in fur. Wendy got a contract. I continue to edit my next book. This week we plan on going to Magic stores and finding out what tournaments they have so I can play some physical Magic. The scale has finally relinquished its iron grip on my post-American weight and is slowly sinking back to normal levels.

A few days ago we walked up to this café next to the Temple de Debod (thank you whoever anonymously corrected me on the name, I am assuming Kinga?) with the Dog of Thunder in tow. (So many names for this dog: Beast, Hound, Stinker, Stinker Pinker, Dog of Thunder, Little Doggie Wetfoot, Perrito Salchicha, etc.)

Making the adjustment back to Spanish food is always a revelation. So clean, so simple, so fresh. We had raw salmon on a thin, three inch piece of toast with a drizzling teaspoon of sauce on top. Our second dish was another piece of toast with pieces of tuna, roasted red pepper and a tiny bit of olive oil.

At night we made BBQ mushroom quesadillas that contained all of three hundred calories for each entire meal.

On Saturday, we again walk up to the dog park, intent on more tuna, salmon and red peppers. This is a long-ass walk and we arrive just in time to find out they have stopped serving food. It is four o’clock in the afternoon and so far today I have eaten air and water. Neither was very filling.

We move on and find a nice place a half a block away with an open kitchen and a terrace so the little beast can lie under the table outside and be fed potato chips and scraps. We order a lean piece of pork on toast with caramelized onions on top. There might have been a little olive oil as well. Three small red peppers stuffed with cod.

Yesterday we went to a small place below us and had little pieces of seasoned beef with a spicy green sauce and placed on a puff pastry. Next was tempura asparagus, eggplant, carrots, red and green peppers with a teriyaki dipping sauce. Then some lightly dressed and grilled lean chicken squares on skewers and one skewer containing three pieces of monkfish flanked by four small shrimp, dressed only in olive oil and salt. No tartar sauce, no ketchup, no cocktail sauce, no heavy batter and nothing processed.

No wonder the scale is finally starting to move.

Next post - Saudi Arabia's Next Top Model!
Posted by Jamie Wakefield at 12:43 PM 2 comments: Links to this post