Three of my Favorite Things 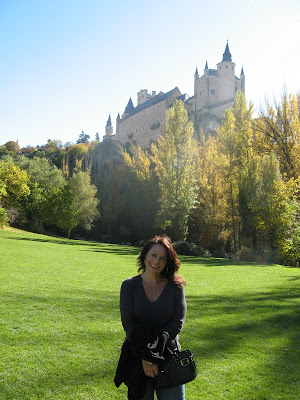 Wendy, Castles, Segovia.
.
Just because I know some of you like to look at Wendy almost as much as I do.
.
(Sigh. The extra periods you're seeing force a line break. Blogger won't give them to me today. I'll work on my HTML next week so I can fix this myself.)
.
Wendy and I have put almost no thought into the ceremony. What matters to us is the gathering of friends, the dance party afterwards, the introduction of friends that have never met. Last night we had Lena, Stefan, Ruth and Sergio over for fajitas and a game of Carcasonne, and I realized that Lena has never met Lorelei. This shocked me. I don't think Leigh has met Lorelei. Dave has never met Leigh. How is it that these great souls, these wonderful people, do not know each other? (I could list a dozen people I consider great souls that have not met each other but that would go on for a long time. Seriously, every single person I have invited to the wedding I would gladly take a bullet for.)
.
I asked Wendy if we should write our own vows and we don't know. The thing is, we tell each other each day, how much it means to have the other in our lives. Do we need to say it in front of a bunch of people when every day we curl up on the couch and tell each other how lucky we are? How much we love each other and why? Do we need to say that in front of other people for some reason?
.
I realized the next day what I would say, and how I would write it, and I thought I was going to write it here, in this post... then I realized that would spoil the words at the ceremony. So, enjoy the picture.
Posted by Jamie Wakefield at 11:17 AM