Big Red is by far my favorite deck right now. The main reason for that?

I don't think I have seen a card so likely to make Kibler stop playing Standard since Lifebane Zombie.

I know it's not that big a deal to say that I made Platinum this morning but that was literally 3 levels with just big red and most of the time it was just pure domination. Plus, sometimes you play a mogg fanatic and your opponent just concedes because burn is the best deck in the format right now.

I think the only thing I would change is the Legendary Zombies for either more Bladewing or more Phoenix of which I have neither.

This guy is about to have a bad time... 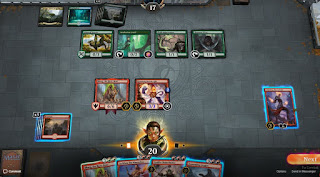 I played the Chainwhirler, attacked, put the dragon into play and he conceded.


Posted by Jamie Wakefield at 6:48 PM