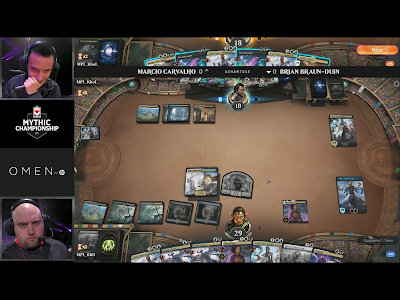 So, Friday I was home sick. I went through a bottle of Dayquil and a box of kleenex flat on my back. Luckily, the Mythic Championship was on.

I think the field of yesterday's Mythic Championship was 41% Esper varients. Regardless of how much it was, the entire first day of coverage, bizarrely, chose to focus on the Esper decks, and the number of mirror matches with slight variations was a bit overwhelming. There were other decks in the competition but all I saw on the screen for 8 hours was Teferi activations.

I was thankful I wasn't on the broadcast staff. Can you imagine trying to make 8 hours of Teferi activations exciting?

Take a look at that screenshot. I had one yesterday with 6 Teferi's on camera between hand, board and graveyard. It's got the twitch chat in it so I used this one instead.

I watched coverage all day and I gotta say, little depressed. Not even white weenie or Gruul or anything stood a chance against Thought Erasure and Teferi. Teferi being the biggest. It hits the board, solves the biggest problem, then your opponent has to kill it somehow, delaying doing anything else but that. The card is unfair and it's not going away.

Imagine this: Your opponent bolts your creature. Now, when you start your turn, you have to attack the lightning bolt. Because if you don't, that lightning bolt is going to continue to have an effect on the board, and in two turns, it's going to bolt you again.

There's no way around this. You HAVE to attack the lightning bolt. It can't stay on the board. Did you have another strategy in mind? Like, maybe going for the face? Or maybe using some discard or drawing cards? Well, that's great but priority one is killing that bolt aka Teferi.

And that card is not rotating out for a long time. Chance of it being banned is somewhere south of zero.

Watching yesterdays tournament gave me the impression that mid-range is not even an option and even agro struggles against Esper.

But, there is some good news that showed up in my feed this morning. 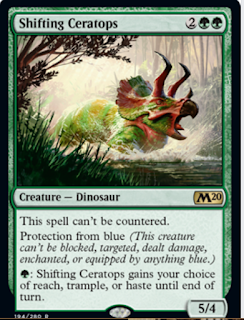 Posted by Jamie Wakefield at 6:33 PM